Your involvement is essential to our success! Help HESSCO make a difference for consumers in South Norfolk County. We are a vital link for area elders, individuals living  with a disability and their caregivers in support of safe and independent living at home.

HESSCO provides support for elders and those who care for them. Services include but are not limited to: home care services, caregiver support, nutrition and nutrition counseling, information and referral, money management and more.

Sign up for our newsletter to stay abreast of the latest events at HESSCO and in the South Norfolk County region. Visit our blog page where an updated calendar will be posted - offering details of important dates to remember. 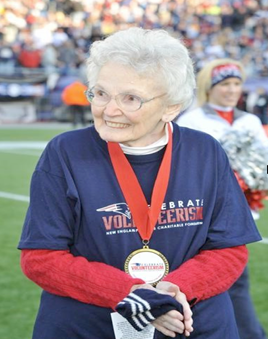 The family of long time Foxboro resident and highly revered HESSCO volunteer, Virginia Hartin, has established a Memorial Fund in her name to benefit the organization that meant so much to her over the years.

Ginny first came to know HESSCO over twenty years ago when her beloved husband Arthur was ill and wanted to spend his final months living at home for as long as possible. Ginny was determined to care for him there.

Someone suggested that a local agency might be able to help her and her love affair with HESSCO began. A few years later her mother, who lived right above Ginny, became ill; she too wished to stay home for as long as she could; this time Ginny knew exactly where to call. Meals were delivered each day; nursing care was available when it was needed and someone even helped with the house cleaning.

The rest of the  family took turns providing care but it was Ginny who could rush upstairs at a moment’s notice. Caregiving can be very demanding. When one could not be there to give Ginny a break, HESSCO arranged respite services so she could run errands or just take a walk; knowing mom was in good hands.

Eventually mom needed to go to the hospital where she passed away, but for many of her final months she was cared for at home. This would never have been possible without the help of HESSCO.

In a show of gratitude, Ginny decided to give back by volunteering. Little did she know how her life would be changed and her world would be enriched because she made the decision to get involved.

First, she delivered meals to the neighbors in Foxboro; then she became an advocate for residents in the local nursing home; she even helped start up dental clinics for low income seniors.

Ginny represented HESSCO on many boards and committees; she testified at the State House and even met with members of Congress.

Most importantly though she always took the time to sit and chat with seniors throughout the community. She intuitively knew that listening, reminiscing and having a few laughs were the small gestures that make a difference in someone’s life.

At holiday gatherings Ginny would talk about the many activities she was involved in; occasionally she would smile and say “Arthur (who was a teacher and union organizer) would be so amazed at ‘what I am up to.’ Ginny was determined to make sure that this community was a good place to grow old.

Eventually she was diagnosed with brain cancer. She remained as active as her stamina would allow, but eventually it was clear, that her final months were near. Within eyeshot of her bed were the pictures taken when she was named by the Patriots Foundation as a Volunteer Who Made a Difference and her HESSCO memorabilia, of which she was so proud.

With home health care and hospice and in the comfort of her friends from HESSCO, Ginny stayed home until she died there on Friday evening October 26, 2012.

With tremendous gratitude for the care her family received over the last twenty years and to honor Ginny’s memory they joined with HESSCO to establish the Virginia Hartin Memorial Fund. The fund will support services like Home-Delivered Meals, family caregiving and care management. Ginny made a difference and we want her legacy to continue.

To learn more about the Neponset Valley RCC CLICK HERE